Jaime
Las Vegas, Nevada, United States
I've trained working border collies for over 14 years and trialed in USBCHA, WCDA and AHBA events. My partner, Mike Franklin and I work dogs in Calico Basin, Nevada. This blog is solely for the purpose of sharing my love of working border collies. I do not have stud service or puppies available. Please contact me at smokinjbc@msn.com and I will be happy to share my recommended working breeders. If you are interested in teaching your dog to be a sheepdog in the Southern Nevada area, please feel free to contact me.

The lambs have finally arrived with only a few hitches this year and Jet has really stepped up to the task of being "the" chore dog for lambing season. She had to have a few reminders to stay back and not push the ewes unless directly challenged, but she adjusted her usual hot-rod self well and it's been fun watching her get smart about how to handle stompy ewes.

The ewe above is one of my nicer sheep, she rarely challenges anything unless directly threatened, so since she was one of the first to lamb, she was good for Jet's confidence.

This ewe was not convinved that Jet was not going to eat her baby, so she did what a good mother does and did her best to persuade Jet to go elsewhere. Jet responded by sticking her tongue out and saying "Nah, nah!". It worked and the ewe decided to diplomatically retreat with her lamb. All in all, Jet's done well. She is not afraid of stompy ewes and will neatly take a nose if one decides to try to run her off but has learned to be gentle with lambs. I usually give her a little "be nice" reminder when she's around them, and she had the hang of it until these hooligans showed up.

They look like innocent lambs but really, they are troublemakers. These are Susan's triplets, only two days old, but they already have their own idea of what sheepdog and lamb relations should be. We were gently sorting out another ewe when these lambs decided to mess with the dog. 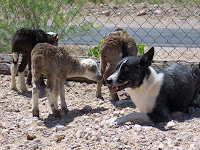 You look interesting to me. 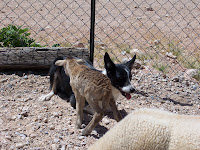 Jet's thinking, "This has gone too far." 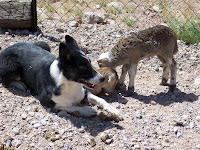 They decided that Jet makes a pretty good pillow.

For the most part, aside from two ewes that are not getting anything for Mother's Day, it's been a good lambing year. 17 lambs total, one had to be handed off for hand raising, but the rest are doing great. This is one of my favorites, I wish they would keep this muley-color. 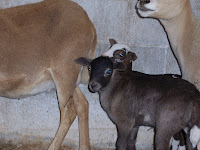 Here's a few more...lot's of spots this year!

What can I say- I LOVE this dog!

Ewe will not pass